Interview with Aurora Fernández Donaire, alumni of the Mathematics Degree, has received one of the two second prizes for the Leonardo Torres Quevedo award for the best Final Degree Project in the IV edition "I have a project" of the Institute of Physical and Information Technologies. 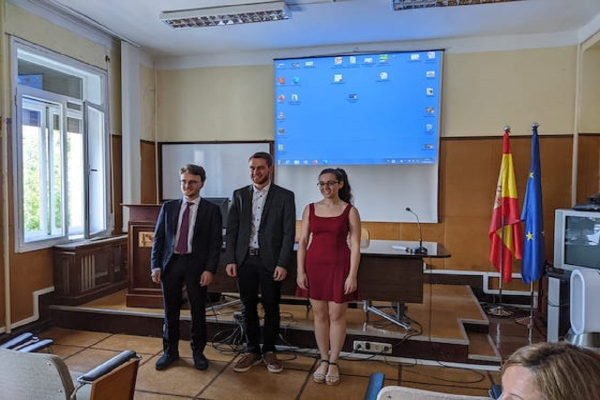 Hello Aurora. First of all, thank you for your time in answering and participating in this interview.

Why the math degree?

When we have to choose a career, unless we are very clear about exactly what we want to do and these are very vocational professions (such as medicine, teaching, law...), the information we have to decide is minimal or non-existent. So I thought about which subjects were the ones I had liked the most up to that moment. They were clearly the sciences, and looking at careers and careers, and their training itineraries in each of the universities in which each one was offered, in addition to evaluating the professional opportunities that each one could offer me, I chose (practically blindly and without knowing how different university Mathematics would be from those at school, ESO and Baccalaureate) for doing Mathematics at the URJC. What did I see as positive? Many outings and the most modern plan of this career compared to the rest of Madrid's public universities, since it had some computer science subjects and they were not all purely theoretical.

Could you explain in your own words what your TFG is about?

My TFG is titled "Post-quantum cryptography based on isogenies". It doesn't make much sense to tell me what "isogenies" are and it is enough to know that they are a type of complex mathematical relationship. So let's focus on the first part, on "cryptography" (and also leave aside the surname "post-quantum").

Our life revolves around technology. Everything from the most basic (such as making a purchase or sending an email) to the most complex (such as a bank transaction) needs information technology to be able to develop. And so that everything can be developed in a secure environment, there is cryptography, which is responsible for guaranteeing the confidentiality, integrity and authentication of the information.

In my work, after explaining all the necessary mathematics and making a brief historical review of the chronology of cryptography, I briefly tell some of the current cryptographic protocols. Then I go on to tell a post-quantum protocol in three different ways (comparing it to its predecessor, more visually and in all the mathematical detail). And finally, I make an implementation of an evolution of the previous cryptosystem with several tests on a computer to see how it works.

What is your immediate future? Looking for a job in a company, dedicating yourself to research, studying an opposition?

I guess this question is a bit late. Although I have received the award now, I finished my degree a year ago, and now I am already working. Although, as I said, since Mathematics offers a large number of opportunities, I do not have everything closed and I value research as well as preparing an opposition.

What has the Leonardo Torres Quevedo award received meant?

What do you think an award of these characteristics can bring you in your future?

I suppose that indeed, a prize of this category granted by the CCN, the CSIC and the ITEFI, is a plus for a professional career. Personally, it has helped me realize what I had done. That it was a very good job, innovative and really difficult to do. It has made me see that in the end the effort is recognized, because this is not the result of a few weeks or a few months but of years and years of work in which this effort is often not valued. It makes me see the complete disaster that is the current educational system in which talent and hard work are not rewarded (rather the opposite). And it is a pity that the few exceptions of boys who choose to follow the difficult path of study are due to great family support, the interest of a teacher who knows how to see further than the others and cares about his students, and above all for their own way of being, capable of continuing to fight and make an effort while others do not need to do so to achieve the same results.

I don't know if you know, but you are a reference for future generations of URJC students. I would like to ask you

How do you see the role of women in science?

I am not and I do not want to be a reference for anyone. Each one has to be oneself.

Oh! How strange, a question that I did not expect at all... It is a subject that is not talked about at all today... What should I answer now? "As a woman, it has taken me a long time to get here. We have to promote the role of women in science, because there are few women scientists or they are not talked about... Blah, blah, blah...". Yes, it has cost me a lot to get here, but not because I am a woman. And let each one dedicate himself to what he wants.

Never, ever, has anyone made me feel different from a man. So how do I see the role of women in science? Exactly the same as the man's.

Any advice for future students?

I am not the one to give any advice to anyone and I don't think anyone is. May each follow their path and trust in themselves.

Well, thank you very much for your time and for answering this little interview, Aurora. We hope you achieve everything you set out to do and we look forward to hearing from you in the future.