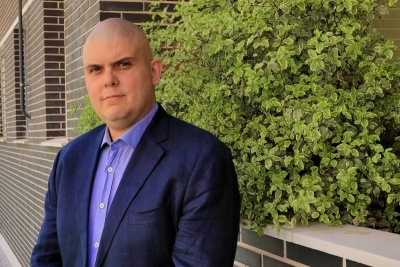 Known as the "Oscars of Political Communication", they recognize the study as research of the year for its contribution against hate speech.

Luis Miguel Romero-Rodríguez, full professor at the Rey Juan Carlos University, received the Napolitan Victory Awards on November 17. Known as the "Oscars of Political Communication", they recognized the work "The demonization of Islam through social media: A case study of #StopIslam in Instagram" as the research of the year for its contribution against hate speech. The study is co-authored by Sabina Civila and Amparo Civila, researchers at the University of Huelva and the University of Malaga, respectively; and has been published in the prestigious journal scientific Publications.

The award ceremony took place at the Arlington campus of George Mason University, in the city of Washington DC.

Raise awareness through the media

The study arose as part of Sabina Civila's doctoral thesis, directed by Luis Miguel Romero-Rodríguez. It deals with Islamophobia: the difficulties that immigrants of this religion suffer when it comes to integrating into Spanish society, the difference in cultures, the existing stereotypes and rejections, among other topics.

This part of the investigation focuses on the spread of xenophobic messages on social networks, particularly on Instagram. It consists of demonstrating the lack of moderation that exists when it comes to filtering publications that incite hatred towards certain minority groups. Taking as reference the case of the label, or hashtag, “#StopIslam”, studies how, even when openly Islamophobic content is denounced, it is not removed from the platform, which can cause an increase in mistrust and hostility towards this group. "It is necessary to make visible everything that we can improve as a society," explains Luis Miguel Romero-Rodríguez. “One of the big mistakes we have is hate speech and generalization. Making this situation visible, we call attention to social networks and the media so that they can correct it.”

Receiving an award of international prestige has great meaning for its authors. "It represents an important support in the recognition of our research career, but also a boost for our groups, research projects and universities", concludes Luis Miguel Romero-Rodríguez.

This award is added to other prestigious recognitions received by the URJC professor in the last year. Among others, he has obtained the Roblón 2020 Award, in the category "Emerging Communication Researcher"; the 2020 Innovative Teachers Award, in its "Covid-19 Mention" category, awarded by the Rey Juan Carlos University; the 2020 Award for the best communication in the "Corporate Social Responsibility" category, awarded by the International Association on Public and Non-Profit Marketing, and the 2021 Index.Communication Award, for the most cited article in the monographic section of the magazine in its first decade (2011-2020).