URJC Theater premieres the play 'Friends, relatives and other strangers' 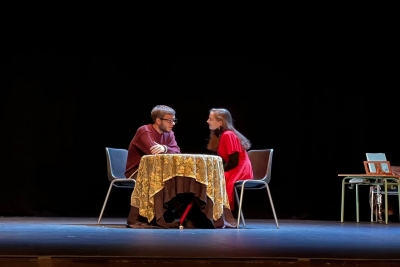 The Josep Carreras stage space in Fuenlabrada hosts the representation of this story based on a series of 1-minute Instagram episodes that the group recorded during the 2020/2021 academic year.

The members of the theater workshop of the Rey Juan Carlos University have returned this weekend to step on the boards of the Josep Carreras stage in Fuenlabrada after two years without face-to-face activity. The pandemic forced the group to adapt and carry out all its activity virtually.

In this context, the participants created a series of 1-minute episodes that were broadcast through the @cultura_urjc Instagram account. That series is now back as a play that the students have intensively prepared to perform at the Josep Carreras Theater in Fuenlabrada.

And it is that with the 2021/2022 academic year, normality seems to timidly return to rehearsals, with a mask and disinfectant gel, but with that physical and vital contact that is so necessary in the theatrical world. 'Friends, relatives and other strangers' is the title of the story to which six actors and actresses have brought to life this Sunday, November 28, before some 120 people.

Víctor Mendoza, coordinator of the URJC Theater Workshop, explains that they have only had 28 days to stage the play, since this year the workshops began in early November. “We have had to make a different and innovative proposal in which the actors have not followed a rigid text. Every time you go to see the play it's different,” he explains.

A work in progress

All the characters in 'Friends, relatives and other strangers' have been evolving from the first moment, as Víctor Mendoza tells us. “The actors have been defining the characters, they have changed their age according to the touch that each one gave them”.

The work tries to reflect human relationships and emotions through characters characterized by frustration and the feeling of being out of place. The common thread of this story is the doctoral thesis of Roma, a psychologist who looks for misplaced people to sample the disturbing current society: loneliness, frustration and the exasperating search for happiness.

With a very simple set consisting of three tables and their chairs and simple lighting, the play is presented as a didactic question and an essay with a series of elements that are not resolved during the play. “Each member of the public developed his own theory which he then shared with the students. The conclusions were very varied”, says Mendoza.

The different Theater workshops of this first quarter end the first week of December. In January, the new groups for the second semester will be launched and, as a novelty, Víctor Mendoza advances that an exclusive theater group for teachers and PAS will be set up.