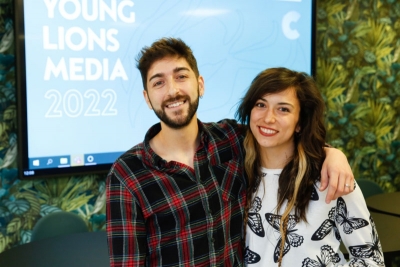 The professor at the Rey Juan Carlos University Sara Larios, along with her partner Alex Peñalba, were proclaimed finalists in this competition. They will represent Spain in the international festival that will take place during the month of June.

Sara Larios Talán, a professor at the Rey Juan Carlos University in the area of ​​Audiovisual Communication and Advertising, was proclaimed the winner of the Cannes Lions International Advertising Festival in the Young Lions Media category. Together with her duo, Alex Peñalba, she will represent Spain in the international competition that will take place during the month of June.

The Cannes Lions International Advertising Festival is one of the most prestigious events in the sector. It brings together thousands of advertising professionals every year in order to expose and share ideas, proposals and innovations. Sara Larios has already participated in other similar competitions: she had won her first prize in the Inspirational contest, even though she was a third-year student at the Rey Juan Carlos University. However, she has always dreamed of participating in the international edition. "After all, it is one of the greatest recognitions that a publicist can have in her career," explains the professor. Finally, encouraged by her peers, she decided to apply for this year's Young Lions Media.

For this contest, each team received a task, or briefing, they had to work in a limited time. In the case of Sara and her partner, she was talking about Doctors Without Borders. Their goal was to carry out a creative media campaign in order to give visibility and express the importance of this NGO. According to Sara, it was an exciting but intense experience: “We had 48 hours to think of the idea, write it on 10 slides and send it. It was very stressful as we only have two days to prepare for the presentation in English.” Her effort was fruitful: the proposal was named as one of the three finalist projects.

Sara remembers the day of the competition fondly. "It was a morning of nerves and excitement," says the teacher. "We met wonderful people, and the organization of the event has been excellent." When it was finally announced that they were the winners of the contest, she was slow to believe that she was truly going to represent Spain at the International Festival.

Now, with a month to go until the contest, she is determined to take on all the challenges it may bring, as well as enjoy the experience. It also highlights the importance of participating in this type of event. “As a professor of Creativity at the Rey Juan Carlos University, I try to make my students aware of this type of festivals and contests,” concludes Sara. “These are unique opportunities that many people miss and that, without a doubt, are very worthwhile. Whenever there is something, I encourage you to participate. If you don't show up, you sure won't win!”