Gold and silver for the URJC at the 'NATO 2030' awards 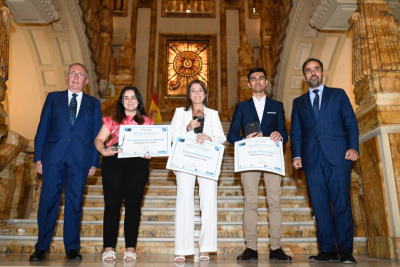 The works presented by the URJC students, represented by the "Francisco Villamartín" Chair of Security and Defense Studies, won the first two prizes in this contest organized by the Spanish Atlantic Association.

The students Nair Robleda and Alessandra Pereira have won the first and second prize, respectively, in the first edition of the 'NATO 2030' Awards of the Spanish Atlantic Association.

For Nair, a second year student of International Relations and Political Science, this award has meant the opportunity to investigate more about NATO and to be able to live life experiences in which to put into practice what they have learned in the classroom.

For her part, Alessandra, a third-year student of International Relations and Journalism, wanted to vindicate the brilliant work carried out by our university by presenting opportunities like this to students, being aware of how lucky she is to be able to train as a professional in Madrid.

The contest consisted of carrying out a research project on the subject of NATO 2030, on the occasion of the celebration in Madrid of the next summit of the Atlantic Alliance, on June 28 and 29, in which a new strategic concept will be approved for this organization.

The students were accompanied by the rector of the URJC, Javier Ramos, who attended the awards ceremony, together with the rest of the academic and military authorities and the president of the AAE, Adolfo Menéndez. Ramos highlighted "the role of the University as a vital pillar of the promotion of the Culture of Security and Defense", as these transmitters of thought and "institutions older than the States themselves".

The URJC papers were presented through the 'Francisco Villamartín' Chair of Security and Defense. Its director, Vicente Garrido Rebolledo wanted to highlight the importance of the imminent NATO summit also for students, as well as to praise the quality of the works presented. In his own words, “it is very necessary that the promotion of the Culture of Security and Defense has young allies, since these will become future agents of change”.

Along with the two winners of the URJC, seven other students from universities such as San Pablo CEU and Francisco de Vitoria will have the opportunity to visit the NATO headquarters in Brussels on July 13-14. In addition, the three best works will be published, in Spanish and English, which will allow Nair and Alessandra to disseminate the results of their research as URJC students.