Nuñez Feijóo: "One comes to politics to wear out, to make complex decisions even if that erodes the vote" 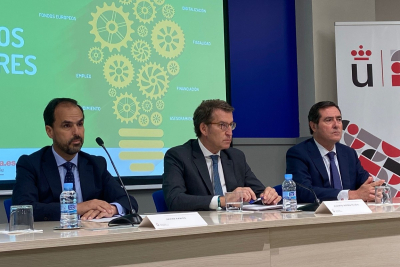 The president of the PP and that of the CEOE, Antonio Garamendi, have been the guest speakers on the second day of the summer course dedicated to the self-employed and entrepreneurs.

Rosa Marquez of the Order

Alberto Núñez Feijóo has arrived at the URJC headquarters on Quintana Street surrounded by the media and much expectation. The president of the PP came to talk about taxation, but in his speech he made an analysis of the economic situation in the country, which he considers "very worrying", and he took the opportunity to explain the main political lines that his party wants to adopt to face to the crisis. “The Government has included measures that we proposed, such as lowering VAT on electricity and aid to the most vulnerable, but they are not enough. If they have to make a decree law and change it after 90 days, it is because they made a mistake.” In addition to the reduction of taxes, the leader of the popular advocates cutting the “bureaucratic and unproductive spending of the State. We have 22 ministers, they are two soccer teams with a coach, who is the president, it makes no sense to maintain that expense in such a difficult time. He considers that the self-employed will once again be a key piece for the economic recovery: "each self-employed person is a small company that risks their assets, sometimes scarce, and puts all their resources to make ends meet, generating wealth and employment" and proposes for them a "timeless and selective tax cut, a fair and balanced contribution system for real income".

Feijóo assured that his motivation for being in politics is “to serve the 48 million bosses we have, who are the Spanish. You have to generate illusion and not fear. Politics understood as a game of occurrences has to be a thing of the past” and he stated that he did not conceive of his work as “a comfortable service, one comes to politics to wear out to avoid wearing out citizens”.

Along with the leader of the PP was the president of the CEOE, Antonio Garamendi, who also participated in the last edition of the course. Garamendi considers that the Government must guarantee that pensions are sustainable and was concerned about inflation, "we can talk about entrepreneurship, but without an ecosystem that can help us it is very difficult." He addressed the problem of the underground economy, "which is around 24%, while the rest of Europe is 13%" and, like Feijóo, pointed to the reduction of taxes as the key to relieving the economy of companies and the freelancers.

For his part, the rector of the URJC, Javier Ramos, has asked that they have the university “the great social advances have been born with the university. Spain is the nation that has created the most universities outside its territory, especially in Latin America, but at some point in our history we forget that the university is an investment and not an expense”. Along with those responsible for the PP, CEOE and ATA, the director of the Tax Management Department of the Tax Agency, Rosa María Prieto Del Rey, and the professor of Financial and Tax Law Javier Martín Fernández have taken part in the course.