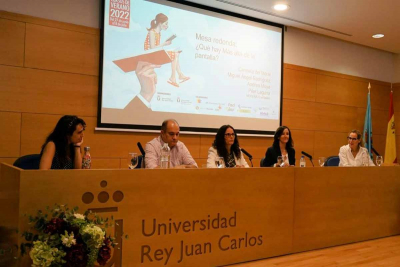 The teachers Pilar Laguna and Rebeca Martín address in the course 'Childhood and adolescence online: for a secure digital life' how to educate the little ones in the use of new technologies

Rosa Marquez of the order

Addiction, isolation or disconnection from the environment are some of the consequences of the misuse of technology among young people, as revealed in the conference.

The first edition of the summer course 'Childhood and adolescence online: for a secure digital life' has been a success, with a full house and more than 110 people on the waiting list. "This shows the interest that the subject arouses and above all the need, both on the part of teachers and families, to address this issue," explains the director of the URJC Education Observatory, Pilar Laguna. Among the main risks that children and adolescents face in their daily relationship with technology are addiction, isolation or access to inappropriate content. Precisely the viewing of pornography from a very early age is one of the issues that most worries families: "It is necessary to train them in sexuality, but also in a critical spirit, so that they can discern what is right from what is wrong and separate the reality from fiction”. According to Laguna, there is a gender gap in the consumption of this content, "boys watch porn to satisfy their desires and girls to attend to their desires".

Among the negative effects of the use of social networks is body dysphoria, the obsession with Instagram filters often lowers the self-esteem of adolescents and makes them have unrealistic expectations about their image and life. “That sometimes makes them shut down, why am I going to compete in the real world where I don't wear branded clothes, I'm not like those who appear on the networks and I live in a humble house? Well, I set up my new world and I don't get out of there anymore, with all that that implies”. In this sense, Rebeca Martín, co-director of the course, believes that students must be required to influencers "responsibility as content creators, but also to the platforms, to the brands that sponsor them and to the adult consumers themselves, as part of the responsibility we have with our children."

The Digital Services Law was also announced during the course, which aims to impose a regulatory framework to protect the rights of Internet users. “The role played by the Government when it comes to regulation is important, because there are things that can be prevented with a critical spirit and training, but in others the Administration will have to exercise control,” says Martín.

The course is aimed at families and teachers, both active and in training, but adolescents have also participated, who have contributed their point of view and their personal experience to enrich the debate. “At the Education Observatory we are convinced that we must integrate them and listen to what they think and it has been very revealing because it has dismantled the myth of the native and the digital migrant, they have also revealed to us which are the social networks that they use and those that are they have become obsolete and we adults were in the obsolete ones, although we thought we were very modern”, jokes Laguna, who hopes that next year there will be a second edition of the course to be able to continue researching and providing solutions from the university.