The ancient Near East from all points of view 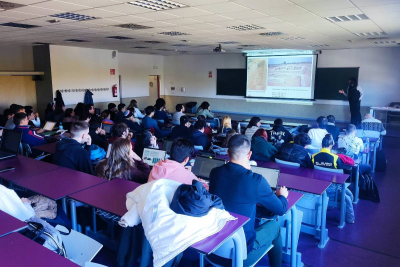 A day analyzes the archaeological findings and the tourist possibilities of this part of the world.

The 'III Interdisciplinary Conference on Ancient History', held on November 18 at the URJC, focused on the study of the Near East from different perspectives. Thus, "analysis of various aspects of the archeology and culture of Antiquity, and its possibilities for tourist and heritage use" has been addressed, says Helena Domínguez Del Triunfo, professor of Ancient History and organizer of the symposium.

The conference given by Professor Fernando Escribano Martín has dealt with the beginnings of the discipline of Orientalism in Spain, taking as an example the first Spanish travelers to the Orient and, specifically, to Iran. To do this, he has analyzed the life and work of important figures in the country's history, still largely unknown (diplomats like Adolfo Rivadeneyra). The teacher has linked these biographies with various institutions that we can still see in Madrid today, such as the Royal Academy of History, the National Library, the National Archaeological Museum, or various historical buildings.

“History students have been able to discover the contribution of these scholars to the knowledge of the ancient Orient, despite the fact that many of the works are not taken into account in the traditional construction of the current historiographical discourse on the region. On the other hand, it is useful for Tourism students to take into account the possibilities on thematic routes that the life and work of these authors entails, both in Spain and abroad”, explains the URJC professor.

For her part, Professor Carmen del Cerro Linares spoke about the archaeological project in Al Madam, in the Arab Emirate of Sharjah, which she currently directs, and which has been active since 1994. During these years a necropolis, a town, a system of underground galleries for channeling water and an artificial palm grove, which are currently being studied from different disciplines (history, archaeology, zooarchaeology, physical anthropology, paleobotany) and which demonstrate the advanced knowledge of the inhabitants of this area of ​​the Peninsula Arabic during the First Millennium.

“The conference has focused not only on the aspects of the excavation, but also on the management and inclusion of the central region of the United Arab Emirates (where the aforementioned site is located) in the UNESCO World Heritage list and the promotion of tourism in the area, which is a project still underway”, says Helena Domínguez Del Triunfo.

A total of 60 students have attended the conference, which is "very well received", according to the URJC professor, who hopes to "continue with this initiative next year, with a similar model".

A different way of approaching the ancient world of one of the areas of the world with the most history.