The next day October 26, at 16.00:21 p.m. The presentation of the Employment and Internship Program of the H10 HOTELES group will take place at the University headquarters on Calle Quintana-XNUMX, Madrid. This presentation is aimed primarily at final year students and recent graduates in Tourism, Tourism and Marketing, Business Administration and Management, Tourism and Business Administration and Management, and Masters in International Tourism Management.

Next April 27, at 16.00:21 p.m. The presentation of the Employment Program in Germany for final year students and recent graduates of the Degree in Early Childhood Education, presented by the Helmeca company, will take place at the University headquarters on Calle Quintana-XNUMX, Madrid.

Pre-registration is required to attend, through the following link

Next March 16, at 16.00:21 p.m. The presentation of the Employment and Internship Program of the international hotel group ACCOR will take place at the University headquarters on Calle Quintana-XNUMX, Madrid. This presentation is aimed primarily at final year students and recent graduates of the following degrees: Tourism, Business Administration and Management, Translation and Interpreting, and International Relations.

As part of the "Encounters with Companies" Program, we inaugurate the course with the presentation of the internship program of the public company Correos, which will take place on November 16 at 16.00:21 p.m. at the headquarters of Quintana XNUMX, Madrid.

This activity is aimed at the following degrees: Mathematics, Science, Service Management and Engineering, Business Administration and Management in the Digital field, Labor Relations and Human Resources, International Relations, Protocol, Political Science and Public Management, among others.

Limited capacity. Mandatory prior registration through the following link

Next June 8, at 11.30:21 a.m., at the University headquarters in Quintana XNUMX, and as part of the IV edition of the Meetings with Companies that are being held periodically, the presentation of the Fremap company and its offer of internships and employment, for graduates and final year students of the degrees of Ade, Human Resources and Labor Relations and Law.

Restricted capacity for the event and mandatory registration to attend, through the following link

Within the job placement program for recent graduates and final year students, next May 18, at 11.30:21 a.m. At the University headquarters, in Quintana XNUMX, there will be an information session on internship and employment opportunities in European Union organizations, by representatives of the Office of the Unit for the Promotion of Spanish Presence in European Institutions of the Ministry of Foreign Affairs , European Union and Cooperation.

The session is aimed at final year students and graduates of Political Science and Public Management, International Relations and Law. 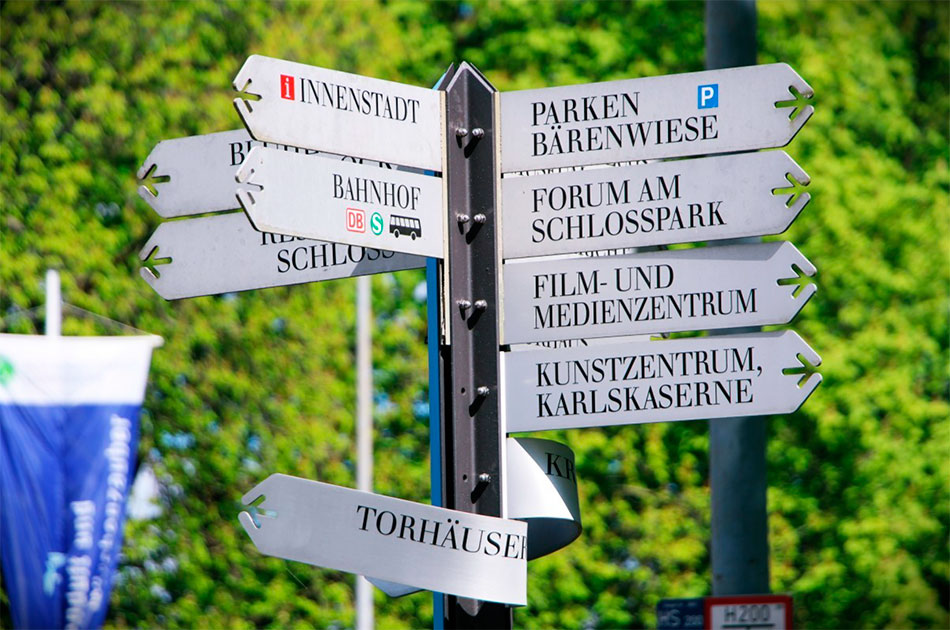 On Tuesday, January 30, the third edition of the Professional Career Day will take place at the ETSIT. It will take place in the Assembly Hall of the Management Building. This conference is of interest to 2nd, 3rd, 4th and master's students. We encourage you all to come.

The fair will be an informal space where you can approach company representatives, chat with them, ask about job opportunities and, if you wish, hand them your CV.

We will have the assistance of the following companies (alphabetical order):

Presentation by the Deputy Director of the ETSIT

Presentation of the Master, by Carmen Coya (URJC)

Each company may have a table/stand in a space adjacent to the Assembly Hall.

The interviews will take place in the Management Building itself in the School Management rooms (first floor, above the Registry)

How to get there: 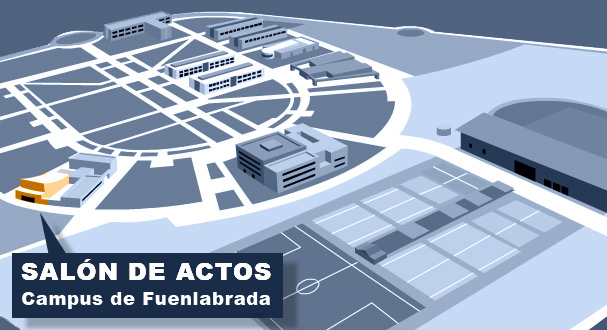 * Companies can set up the stand from 15:00 p.m. in the adjacent space
* Companies can project transparencies during their presentation.
* Companies can request rooms to conduct interviews, depending on availability.
* A web space will be enabled where companies can find the CVs sent by students.
* Interviews can be held from 13:00 p.m. to 15:30 p.m. and from 18:00 p.m. onwards.

Workshops to improve the employability of students and university graduates.

Once the registration is requested, it will be communicated if there is a place.

Convenient to bring a Curriculum Vitae. 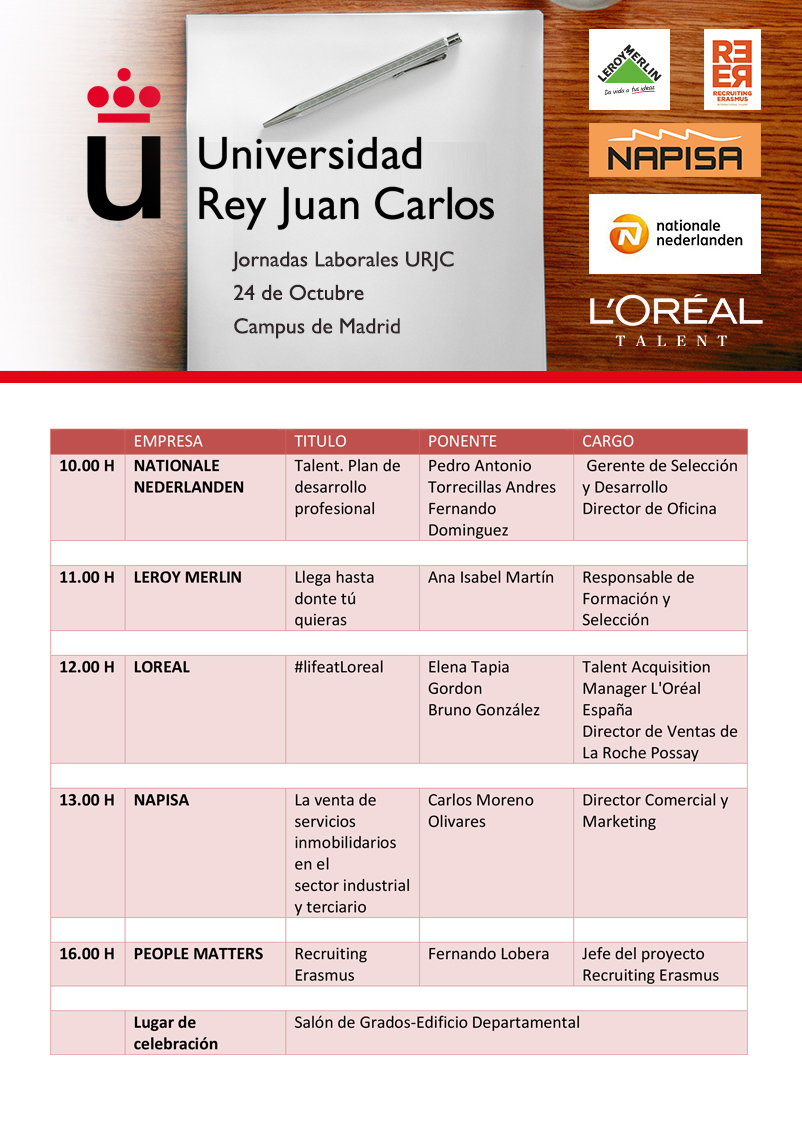 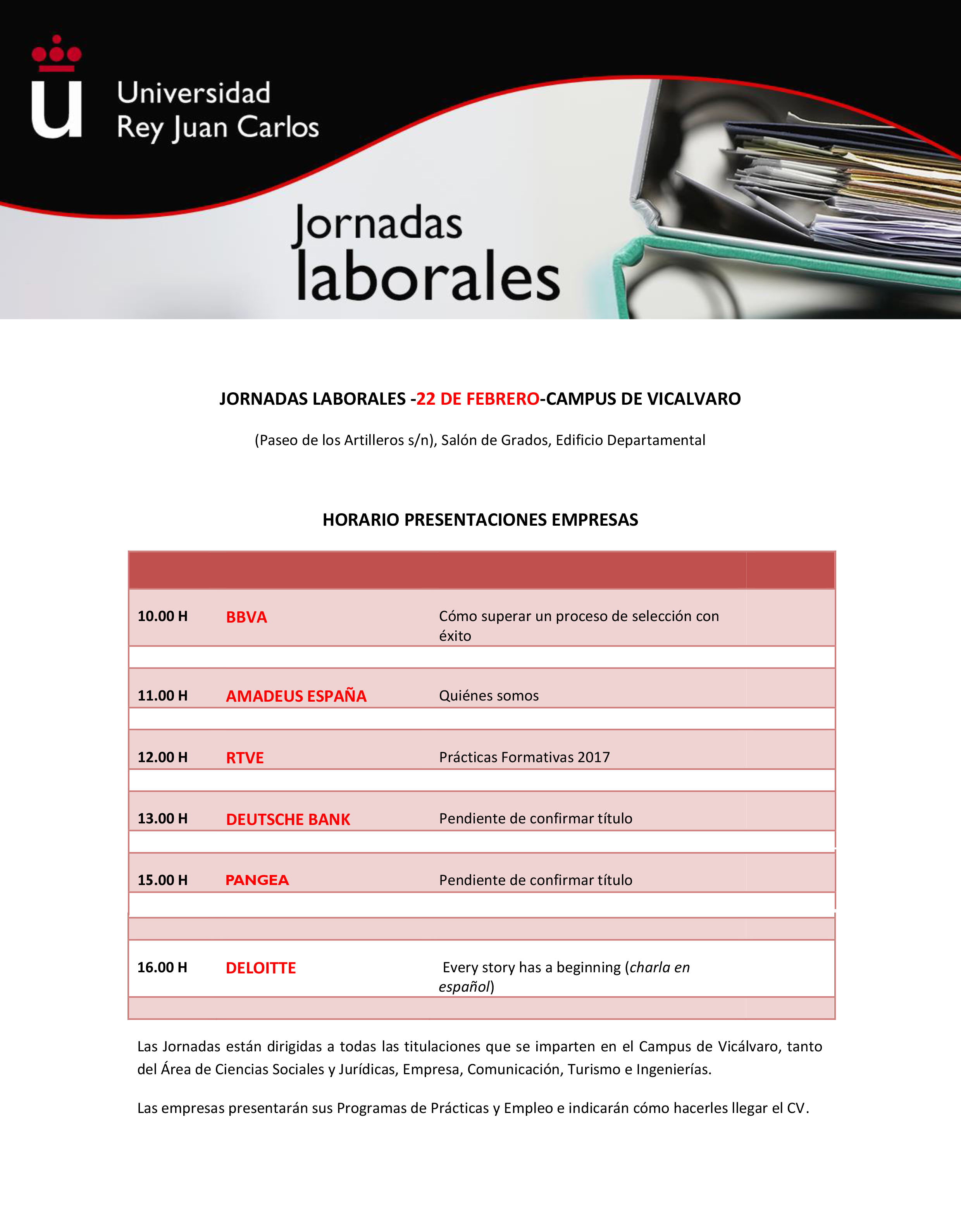 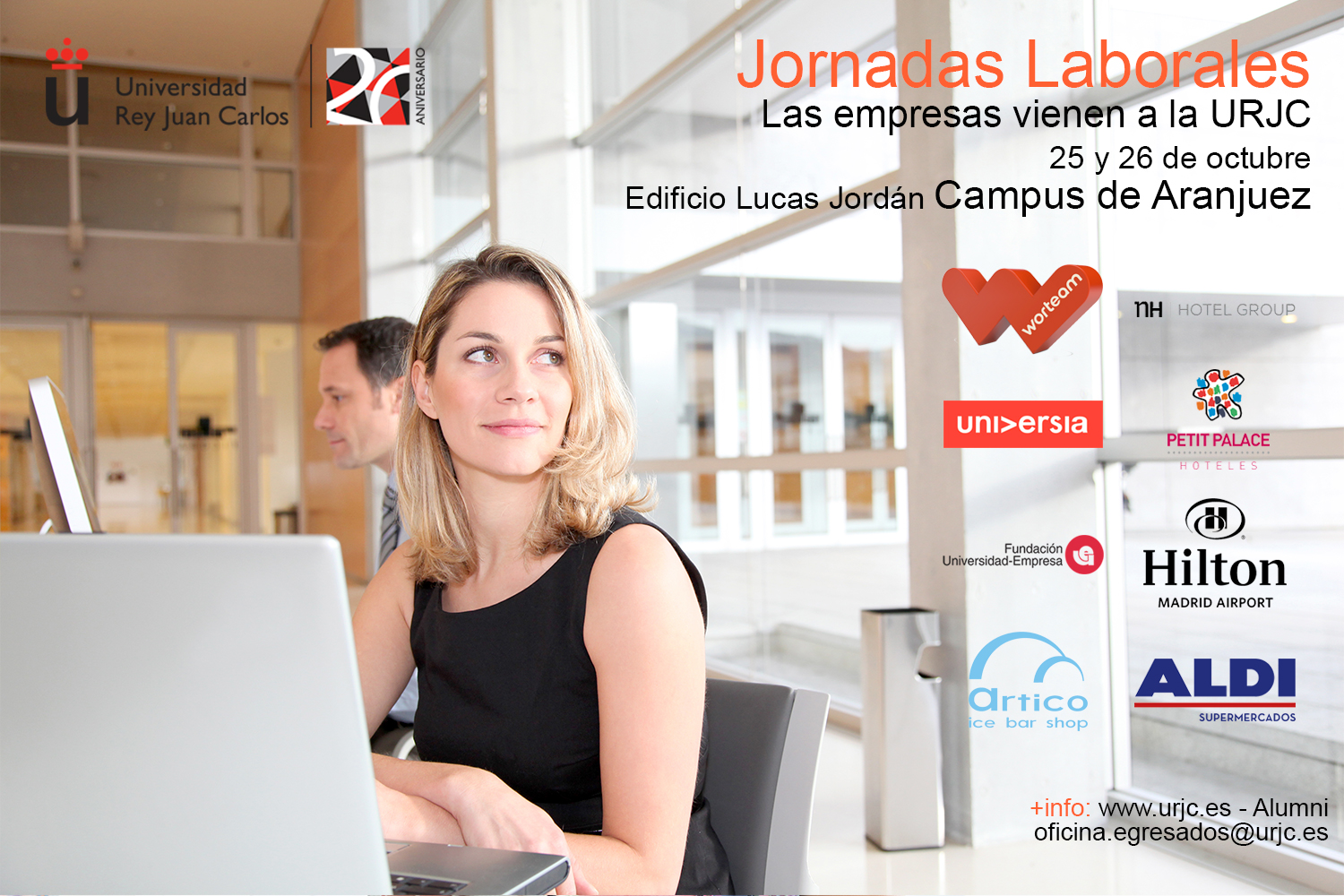 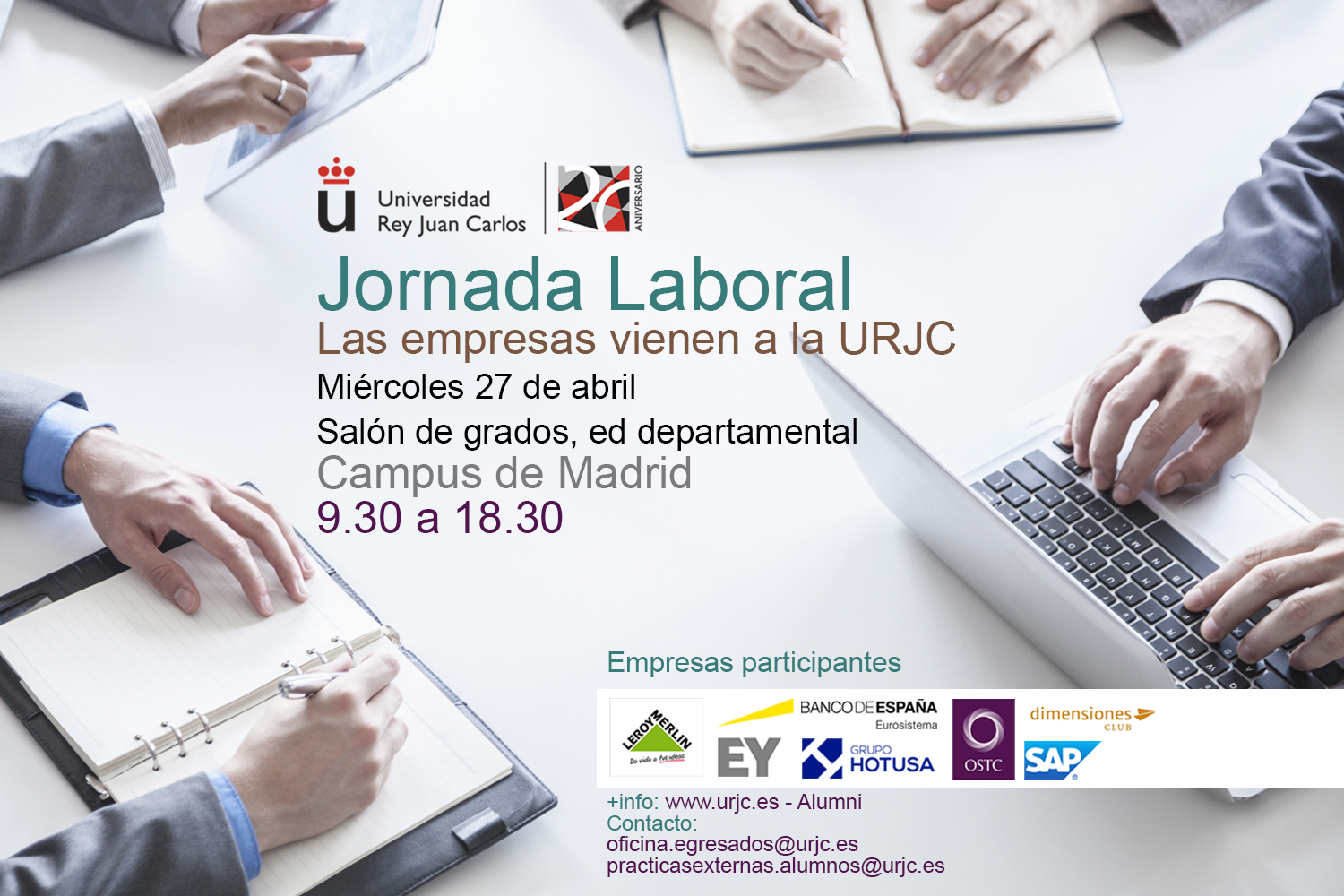 On January 25 at the Fuenlabrada Campus, the IV edition of the Work Days Program that our University has been carrying out since October 2014 took place.

This edition was dedicated to the Higher Technical School of Telecommunications Engineering, for the profile requested by the participating companies: Accenture, Deloitte, PricewaterhouseCoopers (PwC), Thales and DreamTechnology.

More than a hundred final-year students from the School, as well as Master's students, attended the event, with participation being a success, higher than expected by the participating companies.

The companies arrived at 15.30:XNUMX p.m. and they were received in the hall of the Management Building by Maria Paz Matesanz, Director of the UPE and the Alumni Office, Gregorio Robles, Deputy Director of Research and Internships in Companies, and Julio Ramiro, Academic Secretary of the School.

The event began at 16.00:XNUMX p.m. with an informative talk by the director of the Unit on the management of internships. She then welcomed the participating companies and thanked them for their participation in the event and the collaboration they have been providing in the practical training of our students.

The companies made a brief presentation of their company, and spoke to them about the role of the engineer in their companies and the benefits of starting their professional career with them. Next, and in different spaces enabled for this, selection interviews were carried out among the attending candidates.

The event ended around ten o'clock at night, with thanks from the companies, for the reception of the University and for the number of students who attended the call.

On behalf of Accenture, Carmen Marín, head of HR, and Diana Mahecha, a former URJC student with a degree in Telecommunications Engineering, attended.

On behalf of Deloitte, the presentation was given by Virginia Sesmero, who presented her innovative Cybersoc program.

On behalf of PwC, Manuela Iniesta Añover, head of selection, was present.

From Thales Alenia Space Spain, Ángel Álvaro, R&D Manager, explained in a very didactic and motivating way what the role of the engineer is in this company.

Lastly, a small company called Dream Technology exhibited its projects to the students under the guidance of its Director, Carlos Zúñiga.

I Conference of tourism graduates