The URJC celebrates the second edition of Ciencia eres tú 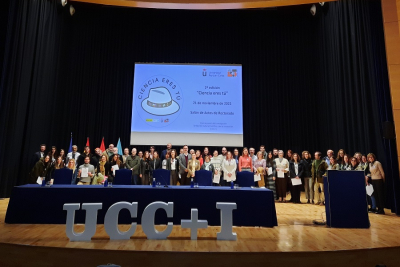 The Vice President for Research and the UCC+I have organized this event to highlight the importance of scientific dissemination. During the event, the IV Prizes for Scientific Dissemination and the diplomas for participation in the twenty-second Science Week and the thirteenth European Night of Researchers were awarded.

The scientific community of the URJC has received recognition for its effort and dedication in promoting the interest and knowledge of society on scientific issues. The second edition of Ciencia eres tú has invited the teachers who have participated in the twenty-second Week of Science and Innovation and the thirteenth European Night of Researchers, two of the most important events in the field of dissemination of science that this year have reached almost two hundred activities between both events.

Professor Carmen García Galera, academic director of the Scientific Culture and Innovation Unit (UCC+I), has shown her gratitude and congratulations to the protagonists of these activities. "We congratulate you because you always search in the trunk of creativity and imagination to bring the most complicated of your investigations to the whole of society, in a simple and understandable way." The director of the UCC + I has also highlighted her contribution when it comes to valuing the role that science has in the advancement of society and the importance of dissemination.

The ceremony was chaired by the Vice Chancellor for Research Visitación López-Miranda González and was attended by César López García, head of the Science Dissemination and Participation Unit of the Spanish Foundation for Science and Technology (FECYT), Rocío Schettini, director of the Office for the Promotion of the Madrid System of Universities, Science and Innovation, and Pilar Fernández de Pablos, head of the UCC+I of the Polytechnic University of Madrid.

The participants of the fourth call for Scientific Dissemination Awards have also received their participation diploma during the celebration of this event. In addition, the Vice-Rector for Research has awarded the prizes to the three winners of this contest, which has the collaboration of the FECYT-Ministry of Science and Innovation.

The first prize went to Pablo Solano López for his activity AulaSPUTNIK, an initiative that seeks to inspire and disseminate through participatory activities in the field of the aerospace sector. This project aims to awaken interest in scientific and technological vocations and bring technological advances closer to the student body. "The themes of the workshops were diverse: understanding what a satellite is and how it helps us in collective rights, how an airplane works, what STEAM is and what gender stereotypes we unconsciously have in the professions", pointed out the professor of the URJC.

The second prize was received by Alberto Polo Romero for the Archeology for All activity, a project that aims to encourage the effective participation of all people through universal accessibility to scientific knowledge of the past.

Lastly, the third prize went to Diana Díaz García for the activity Play with Sci! This set of board games shows how learning chemistry and science in general can be fun, motivating students by adapting games like Monopoly and Who's Who?