Nanomaterials for the treatment of ALS 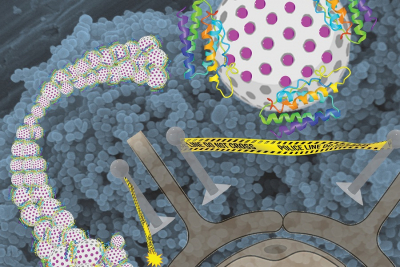 Cover of the November issue of ACS Biomaterials magazine

An innovative study, carried out by the COMET-NANO group of the URJC, together with the Neurometabolism Group of the Research Unit of the National Hospital for Paraplegics, has shown that the use of modified silica nanomaterials as carriers of a cocktail of drugs can be useful for the design of alternative treatments against Amyotrophic Lateral Sclerosis (ALS).

ALS is a neurodegenerative disease that affects motor neurons and the spinal cord causing progressive muscle paralysis, which causes breathing, feeding and speech problems, among others. Today, it still does not have any kind of cure, which usually leads the patient to death in a short period of time.

So far there are very few treatments for this disease and those currently used have a very limited effectiveness, which only in very certain cases are capable of slightly slowing down its progress. That is why the search for alternatives for the treatment of ALS is a priority within the scientific community focused on the study of neurodegenerative diseases.

In this sense, the COMET-NANO group of the Rey Juan Carlos University, led by Professor Santiago Gómez Ruiz, and the Neurometabolism Group of the Research Unit of the National Hospital for Paraplegics, directed by Dr. Carmen María Fernández Martos, have designed a nanostructured system based on porous silica nanoparticles that have been combined with a cocktail of drugs previously studied preclinically by the group led by Dr. Fernández Martos for other neurodegenerative diseases. This mixture consists of the combination of leptin, a hormone that has recently been associated with neuroprotective effects, together with a drug used in the treatment of type II diabetes, pioglitazone, which is also involved in neuroprotective processes.

The studio Design of mesoporous silica nanoparticles for the treatment of Amyotrophic Lateral Sclerosis (ALS) with a therapeutic cocktail based on leptin and pioglitazonepublished in the scientific journal ACS Biomaterials Science and Engineering, shows that the nanomaterial studied is capable of crossing the blood-brain barrier and stopping the disease in a model with mice with ALS, observing that it reaches key tissues associated with the potential treatment of this disease, such as the spinal cord or the motor cortex. “The progression of ALS in the mice studied was much slower, extending their lifespan and showing significant improvements in motor performance, which determined their effectiveness in neurodegenerative models. in vivo”, says Professor Gómez Ruiz.

This pioneering work in this field opens the doors to the development of new alternative nanotherapeutic systems that allow more selective and specific treatments through structural and/or composition modifications, as well as maximizing their potential to massively cross the blood-brain barrier and stop the spread of ALS progression. "Although drugs with high effectiveness against ALS are still far from being found, the advances in this work can be a hopeful starting point for those who suffer from this devastating disease or other neurodegenerative diseases," concludes the URJC researcher.