"The word is the beginning and the end" 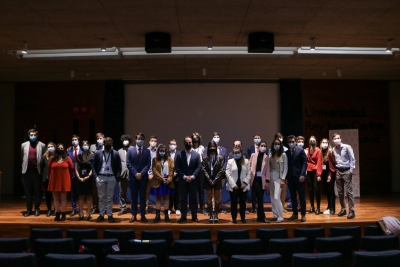 For a weekend, the Rey Juan Carlos University has become the venue for the VII BP URJC, one of the most important parliamentary tournaments in Spain.

Last weekend, from November 19 to 20, debate fans had the opportunity to participate in the parliamentary tournament organized by the Rey Juan Carlos University: the VII BP URJC. The event, held at the Vicálvaro Campus, was attended by 60 teams and 45 judges, making it the largest tournament in Spain for the fourth consecutive year.

The seventh edition of the URJC Parliamentary Tournament, like the previous one, was marked by the pandemic. Masks, staggered exits and a safety distance have become the essential elements of this type of meeting. However, even in unfavorable circumstances, it has managed to bring together dozens of debaters from all over the country during these two years.

The opening ceremony of the tournament took place on Friday, inaugurated with a speech by Andrés Martínez Fernández, vice-rector for Planning and Strategy. The event was also attended by the General Coordinator of Students, Javier Rodríguez Abengózar; Deputy Vice President for Strategy, Diana Benito Osorio; Academic Director of Pre-University Orientation, Student and Alumni Orientation, María Mar Montón García; and the President of the URJC Student Council, Alejandro Suárez Ruíz.

The tournament is divided into six qualifying rounds, a semi-final and the final. This year there was a novelty: a special final for novice debaters. Throughout the three days, the participants have had the opportunity to discuss various topics: from feminism and art, through international relations between India, Russia and China, and ending with the applicability of hedonism in our daily lives.

Finally, the team from Colegio Mayor Universitario Elías Ahúja, made up of Javier Sánchez Villegas and Carlos Montero, has won the tournament. Both have also been recognized as the best speakers at the VII BP URJC, in the general category and in the novice speaker category, respectively. After the awards ceremony, the VII BP URJC came to an end, closing with a speech by Javier Ramos López, Rector of the Rey Juan Carlos University.

For the URJC Debate Club, holding a tournament of such magnitude has meant a lot of work, but also great pride. "I have put all my heart and enthusiasm into the tournament (just like all my teammates) and I think it has been noticeable in how everything has worked," explains Leyre Puyuelo Vidal, president of the URJC Debate Club. “It exceeded all my expectations and I will always keep it in my memory.”

Not everything is organizing

The URJC Debate Club was not only organizing its own event during the month of November: its members also participated in various competitions, achieving great results. On the one hand, the team formed by Delia García and Alessandra Pereira was proclaimed runner-up in the Elías Ahúja Parliamentary Tournament, which was held from November 5 to 7. They also entered the list of best speakers, occupying 5th and 6th place.

On the other hand, the team formed by Belén de Marcos, Teresa Delgado, Fernando Prieto, Ana Cortés, and formed by Laura Rodríguez, participated in the Isabel de España Academic Tournament, reaching the quarterfinals of this tournament.