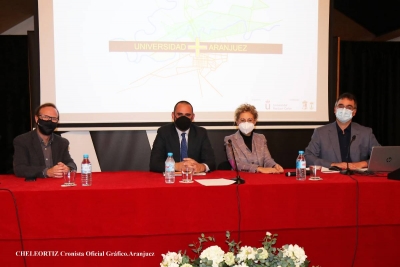 Through the 'citizen laboratories' project, the inhabitants of the town of Aranjuez will be able to participate in creative and innovative workshops on how much Aranjuez has to offer.

The Rey Juan Carlos University and the Aranjuez City Council have recently presented the 'Citizen Laboratories on the Cultural Landscape of Aranjuez', an initiative with which they want to link citizens, with the university, the municipality and everything that it has to offer in the cultural field.

“These are laboratories open to everyone. In the workshop itself, what is going to be done is discussed and done jointly. It is about working with and for the group”, explains Daniel Ruiz, professor of the Integral Design and Image Management degree and coordinator of these laboratories in Aranjuez.

Participating is simple, whoever is interested registers for the workshop through the municipal services of Aranjuez. There he will meet people with common interests regarding the theme of each workshop. Creative solutions are debated and found following the 'Design Thinking' methodology: the problem is put on the table and a way to solve it is sought. This work has three phases: debate, project realization and execution.

Ruíz, a resident of the town, has been in charge of connecting social movements in the municipality with the university and municipal services. “Everyone is saying they want to participate. It is an opportunity for the city, to connect students with it and see it, not only to experience it, but also as a place of innovation”, says the teacher.

Among the nine workshops proposed in the 'citizen laboratories' are very ambitious projects, but, without a doubt, the most striking is the one that deals with the promotion of the town's candidacy as 'European Capital of Culture 2031'. “One of the people I dealt with while designing the workshops proposed the candidacy, an idea that has been very successful and has become a very strong initiative. The mayor has shown great interest and has made municipal services available. The European cultural capital that year will fall to Spain and Aranjuez will compete with cities such as Granada, Alcalá de Henares or Jerez, among others”, explains Daniel Ruíz about this ambitious and important project for the city. This workshop has already started its work

The rest of the workshops cover a wide variety of subjects, always having to do with the landscape and cultural heritage of Aranjuez: 'Landscapes with memory', 'Ephemeral intervention in the Twelve Streets (Casa de Vacas), 'Historic groves of Aranjuez ', 'Education in the landscape', 'Memories of the landscape', 'City and university: a place of vitality and encounter', 'Mobility project and SDGs through the cultural and urban landscape', 'Nature and Sport' and ' A landscape for poetry'.

Of these, there has already been a workshop related to 'memories of the landscape' and a creative format is currently being sought so that the collected memories are not lost. Next December 2nd begins 'A Landscape for Poetry' and the rest will be developed later.

'Citizen Laboratories on the Cultural Landscape of Aranjuez' is part of the general initiative, which is also held on the Madrid and Fuenlabrada campuses, through the university libraries. Daniel Ruíz points out that, through this initiative, “the University shows that it is willing to open its doors and meet the city. The magnificent facilities that the URJC has in Aranjuez will come alive with this strategy”.

'Citizen Labs' is an initiative of the Madrid City Council through MediaLab-Prado, the Community of Madrid and Madri+D in which the Rey Juan Carlos University participates through its libraries. Activities have been launched in three campuses this academic year and it is hoped that they will be extended to the remaining campuses: Alcorcón and Móstoles. In addition, its promoters hope that it will be a project that lasts over time because it involves creatively linking the URJC with the municipalities in which it is present.