The URJC honors its outstanding graduates, on its 25th anniversary 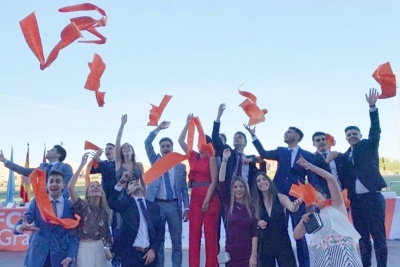 The Rey Juan Carlos University brings together this Friday several of its graduates who have had relevance later in their professional career.

In a few days, the Móstoles campus of the URJC will witness the act of recognition that the URJC, within the framework of the events scheduled to celebrate its 25th anniversary, has prepared for its outstanding graduates. To do this, it has brought together a total of 4 graduates and one graduate who will participate in a round table.

They are Sofía Barroso Gomez, graduate in Tourism and currently Front Office Manager at VP Plaza España Design 5* in Madrid (Spain) and Sara Corella Pérez, graduate in Occupational Therapy, member of the Hospices Civils de Lyon (Network of public hospitals of the French city) and associate professor at the Université Claude Bernard de Lyon (France), as well as delegate of France in the 'World Federation of Occupational Therapists'.

In addition, Marta Díaz Rojo, a graduate in Business Administration and Management and, now, 'Associate Director, Integration and Business Transformation' at Coca-Cola Europacific Partners (Spain), will be taking the floor, who will be accompanied by Mª del Pilar Tejedor Benayas, a graduate in Advertising and Public Relations, which is 'Marketing & Communication Manager' at Volvo Trucks (Spain).

The five will present their experience and what their time at URJC meant for the world of work, commenting on the role that the University played in their lives on a professional and personal level.

After the round table, there will be a discussion with those attending the event.

The event will be inaugurated by the professor, professor emeritus, honorary rector and president of the 25th Anniversary Commission, Guillermo Calleja Pardo. It will be held on Friday, April 1, in Classroom 203 (Aula Magna del Aulario III), at 11am.

I Conference of tourism graduates